After exacting his revenge on corrupt British bankers, Barry Parker’s adventures continue, this time in the East. “New Blood, New Targets” await in this thrilling continuation of Brian George’s “Face and Justice Series” that follows London underworld underdog Barry Parker and his femme fatale allies as they travel the world, seeking to right wrongs with their own rough brand of justice.

It begins when Barry’s colleague, the formidable Annie Xiao Ying, fends off an attempted attack in Hong Kong. The pair engage the assailants, but in the melee, Barry is shot and nearly killed. It turns out that Chinese State Security has targeted her, meaning that the Dream Team faces its deadliest opponents yet – the ruthless agents of world power. This is a far cry from a cabal of British bankers or criminal syndicates. Now, they must use all of their resources, their cunning, and their contacts, that network of sympathetic souls and savvy operators who have retained some morality, to outfox the Chinese Ministry of State Security.

This installment focuses on Annie, a character based on a real acquaintance of the author’s, a femme fatale who embodies independent women capable of handling themselves in rough situations, who can do what it takes to survive in the cutthroat world of soldiers and spies, agents and mercenaries. George also shows readers the Dream Team’s truly multinational network of allies and how they have to rely on one another to stand a chance against globe-spanning criminal conspiracies, amoral corporations, and even intelligence agencies.

Skill, toughness, the ability to get down and dirty while nonetheless abiding by certain principles is what gives the likes of Barry, Annie, and their Dream Team an edge against those who act without conscience and serve the agendas of powerful organizations that treat common people as mere statistics. In a way, these are modern-day Robin Hoods, who, in their own way, are making their stand and get back at those who act with impunity, who are normally considered untouchable. No matter their position, the Dream Team can reach them… and get even.

In a world of growing inequality and callousness, where ordinary people feel hopeless against looming crises such as the pandemic, climate change and economic conditions set to ruin them while enriching a select few, George’s work touches that feeling, that urge, to do something about the unfair conditions and those who would take advantage of the powerless. The castaways and vagabonds of the Dream Team represent everyday people who do have it in them to rise to the occasion and beat the odds, not only individually but as a group of diverse allies complementing each other’s unique gifts and abilities for a righteous cause.

Brian George is a freelance copywriter, novelist, and entrepreneur who enjoys traveling. Earlier in his career, he has worked in construction and engineering sites in many management roles. He has written nine books and self-published seven so far. His characters are derived from fragments of his personality, and his narratives are loosely based on real people and places. 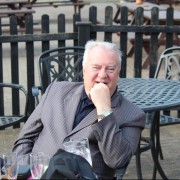 With Product You Purchase

Facebook Twitter WhatsApp Telegram Viber
Back to top button
Close
We use cookies on our website to give you the most relevant experience by remembering your preferences and repeat visits. By clicking “Accept All”, you consent to the use of ALL the cookies. However, you may visit "Cookie Settings" to provide a controlled consent.
Cookie SettingsAccept All
Manage consent

This website uses cookies to improve your experience while you navigate through the website. Out of these, the cookies that are categorized as necessary are stored on your browser as they are essential for the working of basic functionalities of the website. We also use third-party cookies that help us analyze and understand how you use this website. These cookies will be stored in your browser only with your consent. You also have the option to opt-out of these cookies. But opting out of some of these cookies may affect your browsing experience.
Necessary Always Enabled
Necessary cookies are absolutely essential for the website to function properly. These cookies ensure basic functionalities and security features of the website, anonymously.
Functional
Functional cookies help to perform certain functionalities like sharing the content of the website on social media platforms, collect feedbacks, and other third-party features.
Performance
Performance cookies are used to understand and analyze the key performance indexes of the website which helps in delivering a better user experience for the visitors.
Analytics
Analytical cookies are used to understand how visitors interact with the website. These cookies help provide information on metrics the number of visitors, bounce rate, traffic source, etc.
Advertisement
Advertisement cookies are used to provide visitors with relevant ads and marketing campaigns. These cookies track visitors across websites and collect information to provide customized ads.
Others
Other uncategorized cookies are those that are being analyzed and have not been classified into a category as yet.
SAVE & ACCEPT